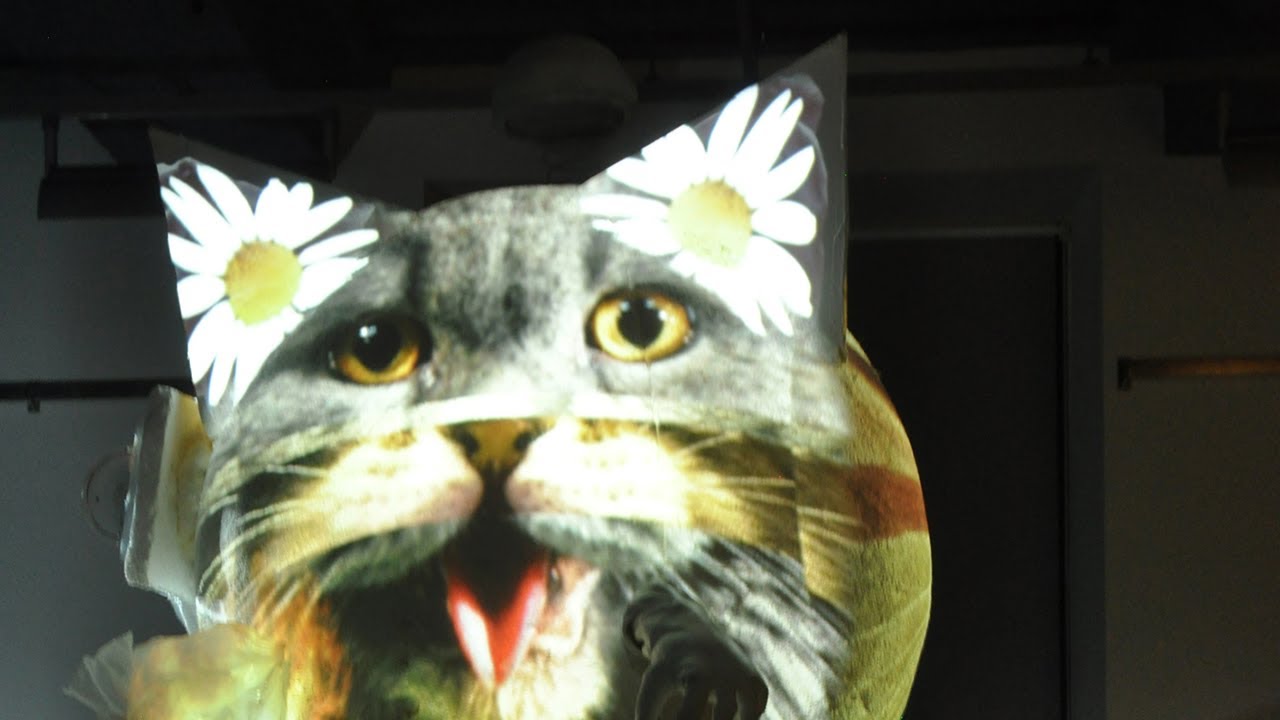 «Catboom!» video sculpture was premiered at Multivision’s «Motion of image and image of motion» exhibition in the Museum of Contemporary Art «Erarta» on November 6th. On 12 Nov 2013, it was donated to Sergey Kuryokhin Contemporary Art Center. «Catboom!» was created by Nieto (France) coauthored with Russian artists during his 31.10-04. 11 master class at the International Festival of Animation arts «Multivision» in «LenDoc» Open Film studio. More about:

«Catboom!» is an artistic investigation of the phenomenon of cats’ popularity on the Internet. A pillar of modern Internet culture, the cat became it’s a totemic animal. It dwells in the Net in millions of shapes and faces – pictures, animated GIF’s, videos. «Catboom!» is an eclectic and complex sculpture covered with mosaics of changing cat images, it hypnotizes the viewer with the magic of this mysterious creature, deified by ancient Egyptians (forefathers of mathematics) and becoming again the object of worshiping in our digital age.
Not a wide-known fact, but at the dawn of both photography and cinematography, cats images were quite popular with the founders of these genres, as well. This suggests a speculation that phenomenal popularity of cats in the net is the sign of new media art emerging. «Catboom!» is one of its first pieces.
French film director, animator, video artist, an award winner of short film and animation festivals in Clermont-Ferrand, Odense, Brussels, Stuttgart and others, Nieto is most known for his short paradox films, made for CANAL+, where he acted as Professor Nieto staging walk on thin ice pseudoscientific experiments featuring various animals.
During Multivision Festival Nieto held a master class for students and young professionals of filmmaking, animation, and theater. This workshop was devoted to the creation of video mapping stage design, special effects, and the combination of live video shooting and animation. It resulted in a new piece of art – a video installation. All participants were asked to bring different objects, which served as material for the creation of a surreal assemblage. Then no less surreal video footage, created of cats filmed at “green screen”, was projected on it using the 3Dmapping technique.
The theme of cats was suggested by «Multivision» festival president Svetlana Petrova, who was personally involved in creation of «Catboom!» along with Zarathustra the Cat, the hero of her World Wide Web famous Fat Cat Art project – experimental creation of an internet-meme, spreading information on art history in the form of LOLcats (funny pictures of cats in the net). As Nieto’s art featured different animals before it was natural to treat a new animal theme.
In order to attract cat performers for «Catboom», Multivision Festival launched a cats casting viral campaign, with over 1000 of Saint-Petersburg cats participating, including some spectacular feline personas: residents of Cats Republic, the St-Petersburg branch of «Cats Museum», along with the Hermitage cats. About 30 cats were selected.
The result of 25 humans and 36 cat’s joint efforts, «Сatboom!» is a collective portrait of cats and humans in the cultural context of precise place and time – St.Petersburg, Russia 2013. Not only the result is important in that work: making-of process is a performance investigating creativity in the age of viral reality.

As a performance, “Catboom!” can be held in another time and place that would result in another cat video installation. The audience can be widened: more humans in cats from all over the world can be involved via the Internet.

In partnership with the French Institute in Saint-Petersburg www.ifspb.com
Supported by North-Western Branch of NCCA www.ncca.ru/spb

Catboom! the film was created from the shots taken during the work on the installation