The Awards of VIII International Festival of Animation Arts Multivision 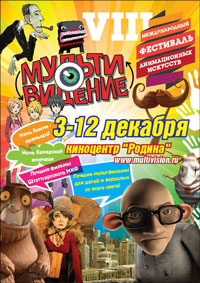 VIII International Festival of Animation Arts Multivision took place at 3-12 December 2010.
The choice of the Jury is 15 best animations in different nominations. This year we got a lot of brilliant animations in our competitive program, more than last year, but the jury decided that there is no main diamond amongst others and decided not to award Grand Prix this year
So the winners of the festival are:

Other awards of 8th Multivision are:

Many thanks for all authors and studios who sent us their works. We are waiting for your new animations at the next year!
Yours faithfully
Organization Committee of Multivision Festival
St.Petersburg, Russia
Share this
Write a comment